Branch offers bundled home & auto insurance plans powered by a community. Its purpose is to make the insurance-buying process much simpler for customers based on a system that delivers instant pricing and faster purchasing steps, completely online. Branch is transforming a red-tape process that usually involves hours of form filling and talking to agents, reducing it down to a couple of clicks.

Their software is a suite of apps that includes a public portal where users can buy and customize their policies; a backoffice app in which Branch representatives manage administrative processes; and a mobile app in which users can take inventory of their goods. To suggest users the right insurance option, the app only asks two questions and then integrates with several data sources to conduct extensive research. Some of the info they collect are from credit reports and driving records. 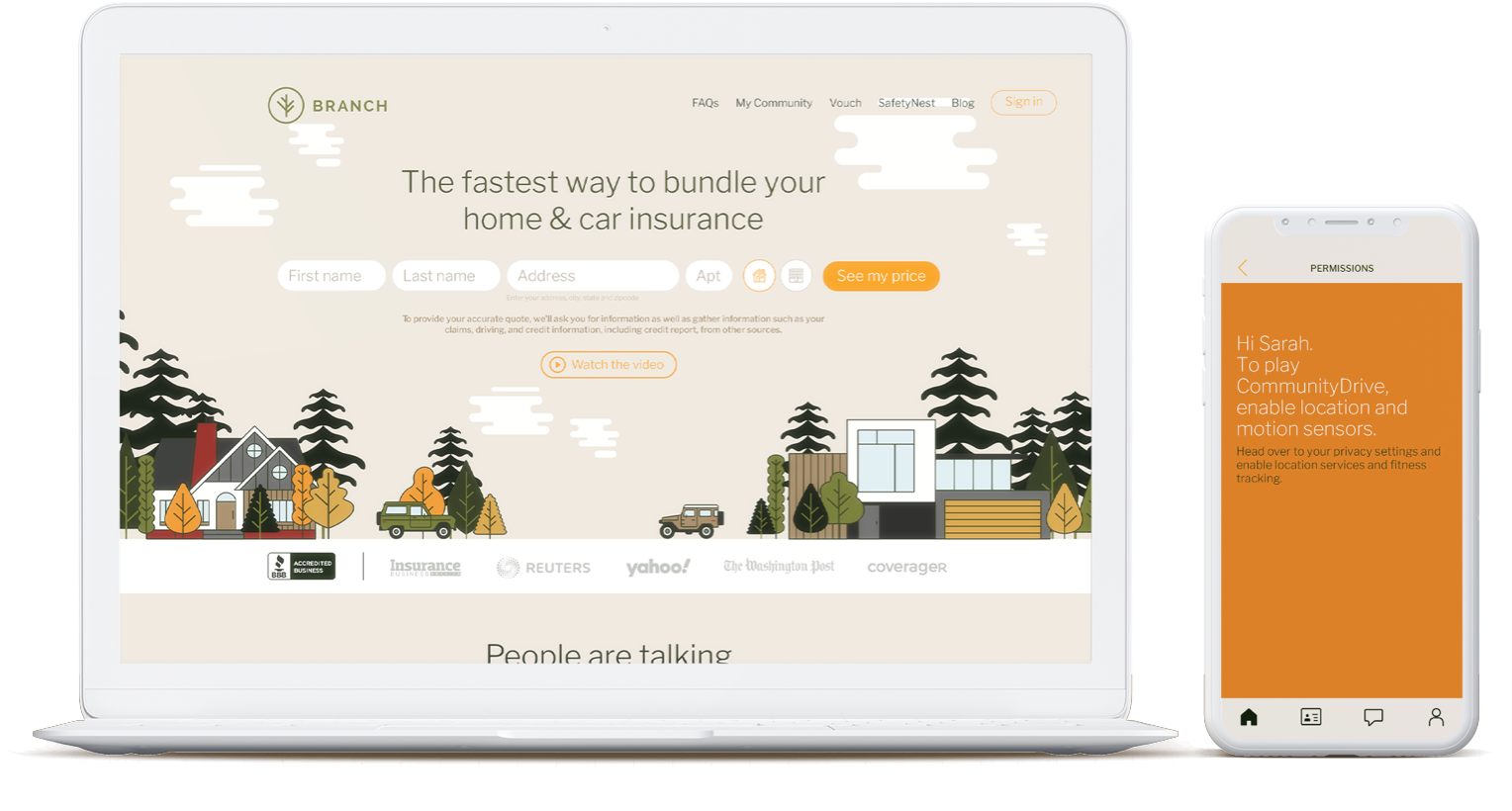 Looking for a trustworthy partner to boost software development

Providing bundled insurance policies directly to users without agents is an innovation that no other American insurance business is offering. Since 2018, Branch’s co-founders have trusted Uruit with the UX design and software development of their product. Our work is centered on the app’s user experience, resulting in a scalable product with world-class design intended to serve customers from different US states, each with their specific insurance requirements.

Product development 100% based on user feedback with constant iterations

We’ve formed a full agile pod for Branch which is located in our office in Montevideo, Uruguay (EST +1 hour). A few months before the app's launch, we flew to the US to participate in a series of usability testing sessions organized by Branch in order to collect early feedback. The goal was to present the app to real users and gather feedback. The process was intense, but rich: a week filled with one-hour long sessions with users and a lot of discussion. Based on the collected data, Branch set new directions and soon the marketing, UX and development areas had new priorities to tackle.

This project sees frequent releases, with each iteration being based on user data collected through integrated tools such as LogRocket and Sentry. These platforms provide us with instant info regarding user behavior and valuable feedback for setting the course of the product’s development. They also rely on A/B testing data and other user metrics to correct usability issues and improve the experience with each iteration.

A set of applications that keep evolving without compromising performance

The most interesting technical aspect of this project is the serverless paradigm, which easily allows the scaling of the application, it’s a key aspect of this business focused on reaching different states in the country and increasing the number of users on the go. To accomplish the serverless architecture, we used several AWS Services such as Lambda, App-Sync, Dynamo, S3, CloudFront, among others. The app is built in React and NodeJS.

One of our top, ongoing priorities during the development is to guarantee the app’s performance, since users access it from a variety of browsers and devices, from cell phones to desktop computers. The goal is that anyone, from any device, can quickly browse the web page and make a purchase. For that, we’re constantly measuring the Time to Interact and similar metrics to make sure they stay as low as possible.

Each two to three weeks, we release a fresh version of Branch with a new set of functionalities and improvements. Embracing quality above all, we work in an environment of continuous integration and end-to-end testing.

Launching the app in more states

The app had its first release in July, 2019, and we keep scaling. The company is growing, as well as the Uruit team that is part of the Branch family. Nowadays, devs and designers are focused on improving the system’s buying process to get more accurate information from users and offer them more customized and better offers.

The app, which was first launched in Ohio, is already available in Arizona, Missouri, Illinois and Texas, and plans are underway to launch it in many more states. The startup’s innovative approach to buying insurance has been shown in The Washington Post, Insurance Business America, and more.

An innovative idea to revolutionize how fan merch is created

H﻿ow a powerful healthcare data company was able to update and boost the potential of their solution with our help, after years of struggling to find the right talent

How we worked towards creating the most comprehensive tee time search in the world.